MTCC has a rich heritage of teaching God’s word and providing camping and convention experiences for Christians from all walks of life. We prioritise these three core convictions

In 1959, the property on which the Mount Tamborine Conference Centre is now situated was a disused dairy farm. Funds raised from conventions along with generous donations by supporters enabled the purchase of the site. A few key men saw the potential of the property and envisioned a functioning Conference Centre to host the annual Keswick Easter Convention, which until that point had been running under a tent a few kilometres away at Eagle Heights.

After much hard work the property was finally cleared. An aircraft hangar was transported from Archerfield in Brisbane and re-purposed as the main Auditorium. For more than 50 years now, and with a number of extensions, it has serve as the site for the Easter Convention. 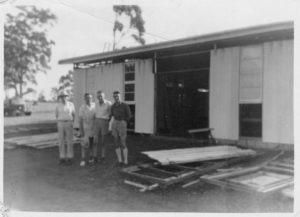 The Hidden Spring, by Gerhard Bargen

Chapter 1 – On the Property

It was mid-year 1957 and after an hour’s motoring from Brisbane we arrived at North Tamborine. We turned right into Beacon Road, a road that was neither sealed nor gravelled. After two kilometres we came to the end of it and from there on it seemed to be just a track, dodging trees and leading to somewhere else. On the left-hand was a steep drop to the Canungra Valley. On the right was an entrance to a property. This was to become the Convention’s very own. There was nothing to make us excited, only undergrowth and a lot of lantana. So we moved on another three hundred metres and came onto an opening. Now we were impressed. The view in front of us stretched way into the distance to Moreton Bay. To the left on a clear day the Glass House Mountains were very imposing. If looks could feed the body, we could live here forever! The air was so brisk, the heavens so blue. Yes, this is it.

From here the countryside sloped to the east and we saw some buildings. We drove up to inspect. First there was a farmhouse. I am not sure if it was ever introduced to paint. It stood on high stumps and I am certain it had a bit of a lean, though not as much as the Tower of Piza. Still, it sure was noticeable. Inside it had three bedrooms plus a big eating/sitting room and a sizeable kitchen. The view from inside was just terrific, no traffic, no noise. What a haven. But there were more buildings. We came to a small structure approximately 9 feet square (3m by 3m). It had a gable roof but no ceiling. Next came a sizeable workshop plus storage. We went further to the cow bails. Well, it had a roof and sides and two bails. It didn’t need windows, and doors were optional. So here was this cluster of buildings and perhaps the phrase that came over us was “Can these bones live?” Let me hasten to say they did.